When DreamFactory Enterprise™ provisions a new instance, a directory is created for it to use as local storage. The location of this directory depends on the mount assigned to the server on which the instance was provisioned.

Mounts can be local or remote storage. As long as the storage space is accessible via the file system of the server, it can be utilized for storage.

By default, DreamFactory Enterprise™ defines the mount point /data/storage for your initial cluster. This directory contains a subdirectory for each cluster. The initial installation defaults to local as the storage area. This exists on your system in /data/storage/local. When you create new clusters, you can configure their storage areas in a different subdirectory, or different mount point altogether. It is designed to be flexible and map to most storage scenarios. This is termed the root storage path.

Below is a diagram of the default layout for storage. 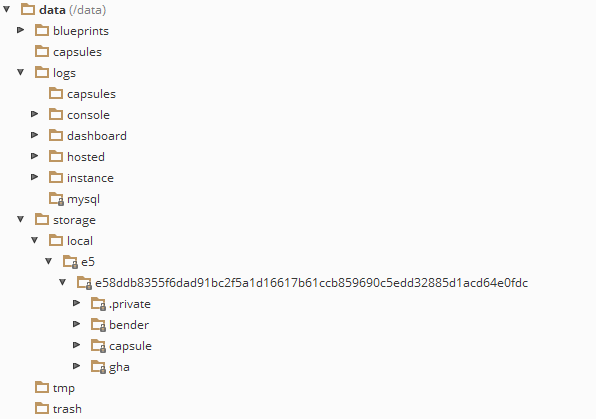 The /data tree contains self-explanatory subdirectories. Under /data/storage is where it begins to get interesting.

With thousands of virtual instances, you don't want their storage areas all homed in the same directory. Firstly, you'll run out of inodes eventually. Secondly, as the more and more entries are added to the file system, access slows down considerably. To combat this performance decay, DreamFactory Enterprise builds a multi-layered storage structure using user information. The instance storage tree then becomes a simplistic hashed directory tree. We call this ***Data Splaying***.

Each Dashboard user is assigned a unique storage ID in the form of a GUID (User.storage_id_text). This GUID is hashed, and with it and the first two bytes are used to create a two-level nested subdirectory. Example with a fictitious user #1:

The InstanceStorage facade offers the following useful methods for retrieving instance storage information. These come in two flavors. The first returns the path as a string. The second type returns a Flysystem object which represents the mount point.